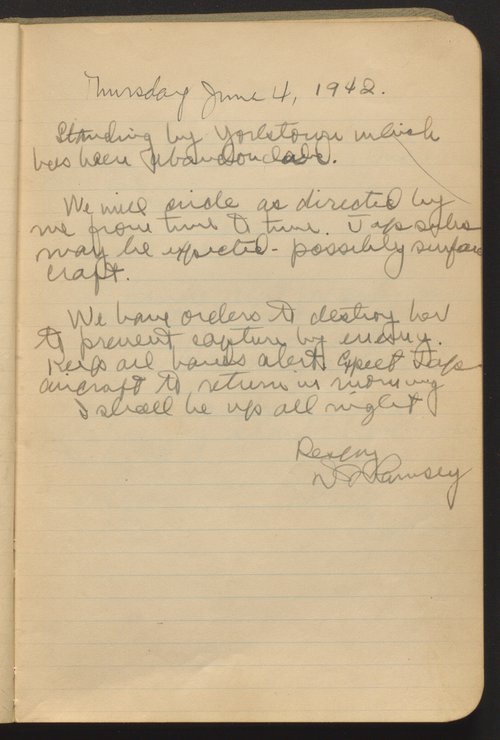 Standing by Yorktown which has been abandoned.

We will circle as directed by me from time to time. Jap subs may be expected – possibly surface craft.

We have orders to destroy her to prevent capture by enemy.

I shall be up all night.

Today marks the 80th Anniversary of the Battle of Midway.

Eighty years ago, CMDR Ramsey, the skipper of the Hughes, wrote this log entry on the evening of the first day of the Battle of Midway. That morning, four PBY aircraft torpedoed the Imperial Japanese Navy's forces headed for Midway. At 0630, the Japanese began attacking Midway. The United States Marines on the island suffered heavy losses. A few hours later, between 0930 and 1030, aircraft from the Enterprise fatally wounded the aircraft carriers Kaga and Akagi while USS Yorktown's bombers struck down Soryu.

The Japanese returned the favor. Dive bombers from Hiryu, the last surviving enemy carrier, launched an attack against Yorktown at 1100. She was struck at noon and, hours later, was hit once more forcing her abandonment. Enterprise aircraft hunted down Hiryu at 1700 and delivered a death blow, forcing the Imperial Japanese Navy to abandon their offensive.

Captain Ramsey was no longer writing information in his pass down concerning maneuvering. He was probably omitting this information because he knew he would be present for most of the ship's movements through the night and because the Hughes' movements would be much more sporadic on their current mission. This mission - to protect Yorktown - was an important one. At this point, the carrier could still be saved which is what the Americans intended to do, but the Japanese had other plans.