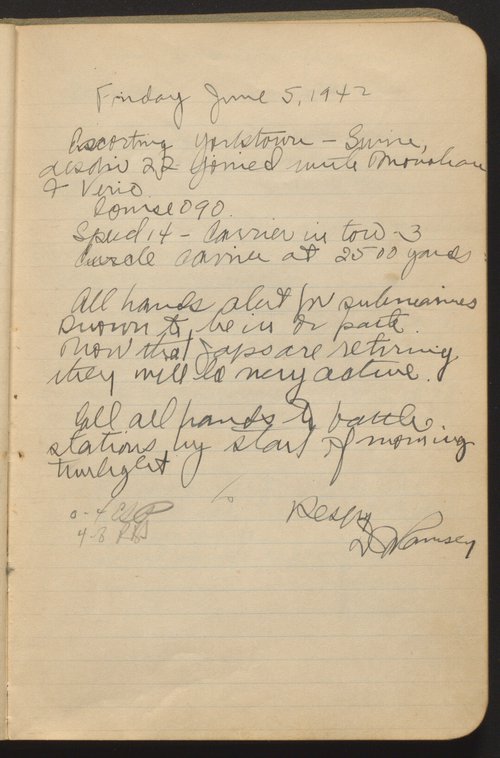 All hands alert for submarines [known] to be in our path. Now that Japs are retiring they will be very active.

Call all hands to battle stations by start of morning twilight

June 5th was the second day of the Battle of Midway. USS Hughes, a destroyer, was part of the salvage effort for USS Yorktown, an aircraft carrier. Note Captain Ramsey's notes at the top of this log entry. Yorktown was no longer making way under her own power. She was being towed by USS Vireo, a fleet tug.

Vireo was massively overwhelmed by the task at hand. She could barely tow Yorktown. USS Hammann, a Sims-class destroyer like Hughes, pulled alongside Yorktown to aid the towing operation and repair the carrier's battle damage.

Meanwhile, U.S. forces gave chase to the Japanese fleet. This doesn't mean, however, that the group attempting to save Yorktown were safe themselves. While Vireo struggled to tow Yorktown at just three knots, a predator stalked nearby.

The contact will be picked up tomorrow. All hands stay alert!