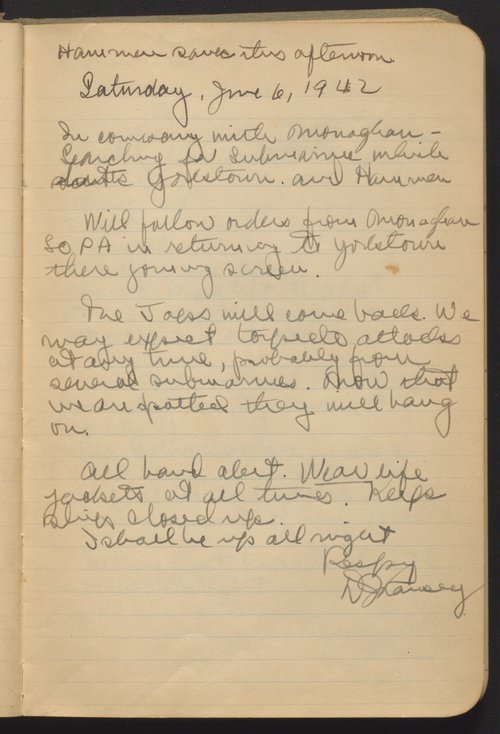 In company with Monaghan – Searching for submarine which hit/sank Yorktown. and Hamman

Will follow orders from Managhan SOPA in returning to Yorktown there joining screen.

The Japs will come back. We may expect torpedo attacks at any time, probably from several submarines. Now that we are spotted they will hang on.

All hand alert. Wear life jackets at all times. Keep slip closed up.

I shall be up all night.

It was the third day of the Battle of Midway and USS Hammann, USS Hughes' fellow destroyer escort for the aircraft carrier USS Yorktown, had sunk.

The destroyer had been alongside the carrier, repairing the carrier's battle damage and attempting to ease the burden on USS Vireo while the fleet tug had her in tow. At approximately 1330, the Kaidai-class submarine I-168 fired a salvo of four torpedoes at Hammann and Yorktown after successfully sneaking through the destroyer screen. This was exactly the moment Hughes and Captain Ramsey have been alert for. After weeks of escorting the oiler USS Platte through the Pacific with no engagements, they had met the enemy they diligently listened and watched for, day after day, night after night. The I-168's stealthy attack was proof of the incredible formidability of undersea warfare.

The first torpedo from I-168 struck Hammann, sinking it in minutes. 81 of her crewmembers died in the water when the destroyer's depth charges detonated. The shockwave damaged Vireo which then cut the tow cables attached to Yorktown with torches. The second and third torpedoes hit Yorktown on her starboard side. Verifying her blows, I-168 dove 200 feet directly below the aircraft carrier to wait for an opportunity to slip away.

This was what Ramsey, Hughes, and the crew trained for. They were more than ready to meet the enemy submarine with full force. Hughes, along with USS Gwin (DD-433) and USS Monaghan (DD-354), assaulted the Japanese sub with around 60 depth charges. At 1530 she was damaged. Her battery cells began to leak, filling the confined spaces with chlorine gas. Flooding also broke out near the bow and she was forced to ascend to 60 feet. She surfaced at 1640, five nautical miles away from the American destroyers. They steamed full speed after the injured submarine firing 5" guns. I-168 escaped, narrowly avoiding death, but would later be sunk by USS Scamp (SS-277) in the Bismarck Sea.