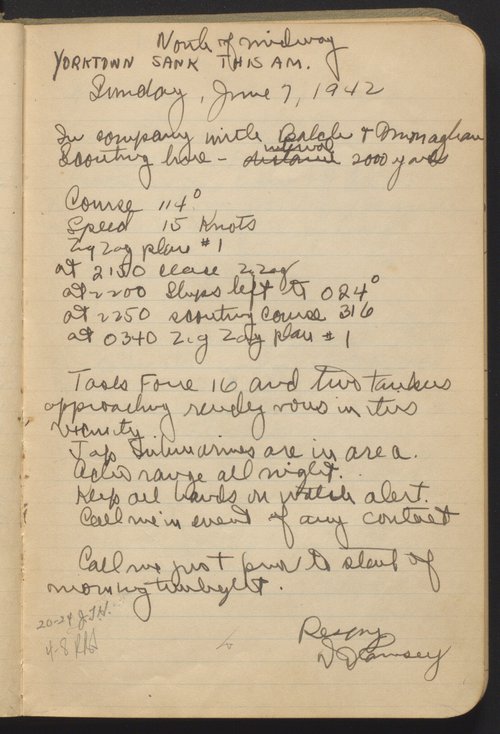 YORKTOWN SANK THIS AM.

Task Force 16 and two tankers approaching rendezvous in this vicinity.

Jap submarines are in area.

Keep all hands on watch alert.

Today marks the 80th anniversary of the final day of the Battle of Midway.

Salvage operations were not continued immediately after the attack by the Japanese submarine I-168 since the destroyers gave chase immediately. For hours they were occupied with hunting the submarine and would not be able to protect USS Vireo if she continued to try and save Yorktown. The fleet tug pulled alongside the carrier and rescued the remaining salvage party who closed all the watertight hatches they could, but the Yorktown was beyond saving. At 0330, the vessel began to list even more dramatically and then at 0501 “she turned over on her portside and sank in about 3,000 fathoms of water with all her battle flags flying" according to a formerly classified Office of Naval Intelligence combat narrative published in 1943.

The Battle of Midway was the turning point of the war for the United States in the Pacific. It stands as one of the most important moments in the history of the Navy. Evident in this social media campaign are the paramount contributions of the Surface Warfare community to portions of Naval history whose retelling generally focuses on Naval Aviation and Intelligence.

Over the next few days the Hughes transits back to U.S. territory and out of harm's way -- at least for the time being.