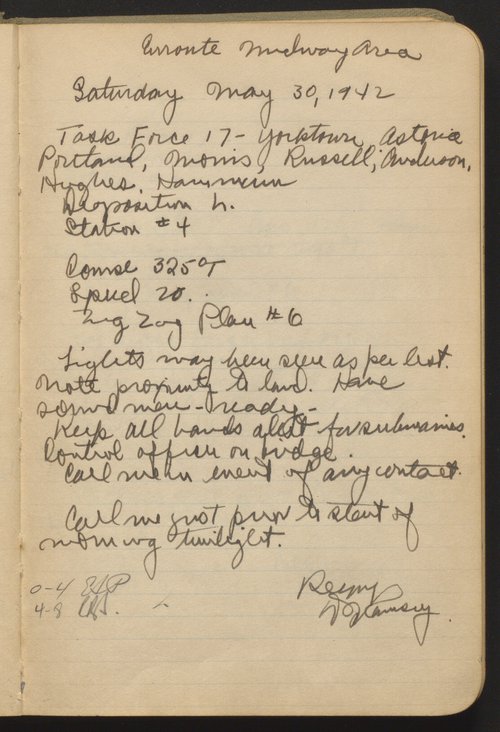 Keep all hands alert for submarines. 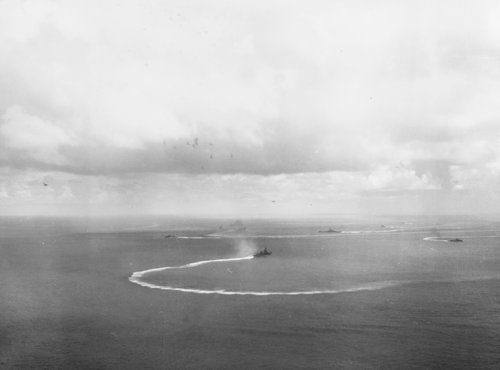 Two days prior, on May 28, Task Force 16, including the USS Hughes, left Pearl Harbor. The Japanese attack on Midway was imminent and the Navy was ready to intercept them. In less than a week, the Hughes and the rest of TF16 would meet IJN forces in the waters of Midway.

The image shown is of Task Force 16 maneuvering while being attacked by Japanese planes during the Battle of the Santa Cruz Islands on 26 October 1942. The USS Enterprise (CV-6) is obscured by smoke in the center, just above the heavy cruiser USS Portland (CA-33). The USS South Dakota (BB-57) is visible in the right center.

Navigational aids would have helped sailors traverse unfamiliar waters for centuries. Captain Ramsey had informed his bridge crew that lights around nearby islands would be visible in accordance with a predetermined list of "nav aids." These would be documented and disseminated throughout the fleet so that crews could safely navigate unfamiliar ports and coastlines.

Captain Ramsey was also emphasizing the ship's close proximity to land. The closer a vessel gets to shore the higher the risk. The navigator and OOD, Officer of the Deck, would need to attain constant "fixes" of their position to insure that the ship did not run aground.