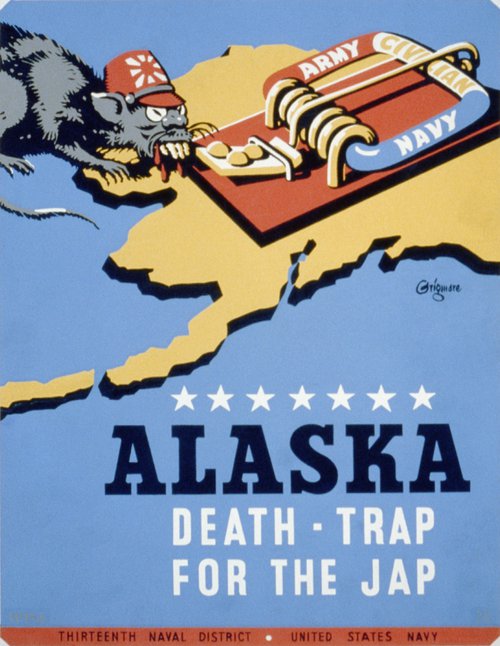 In the most expansive and deadly conflict in human history, the Pacific Theater of World War II stands out for its brutality. Fueled by beliefs of their own racial superiority and the inferiority of their enemies, both Allied and Japanese combatants showed no quarter towards each other, and the record is littered with tales of atrocities large and small. For Americans, the Japanese attack on Pearl Harbor had inflamed anti-Japanese attitudes that had persisted for decades and manifested through immigration bans, prohibitions against land ownership, and other actions that relegated the Japanese to a lesser status. The attack directly led to President Franklin Roosevelt issuing an executive order interning approximately 120,000 ethnic Japanese —many of them American citizens —for the duration of the war. Propaganda tapped into and amplified these sentiments, often portraying the Japanese in a highly caricatured and subhuman manner, often buck-toothed and with squinted eyes, and as bestial, uncivilized apes or a plague of parasites worthy of extermination.

The language used by Americans during this war also reflected this highly racialized environment. Slurs, which were already a part of American culture, became commonplace and casual in their usage. The logbook exists as a document of its time and of the setting in which it was produced. Thus, while it provides an account of a previously untold part of this vast conflict, it also lays bare the language and attitudes that are intertwined with the ugliness of war.