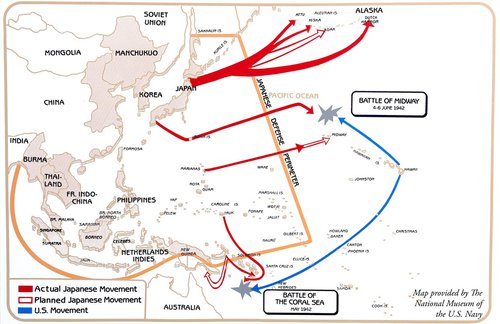 The first six months of World War II in the Pacific had been a disaster for the United States and its allies. The Japanese had gone to war because they needed raw materials such as oil to supply their war in China after the U.S. had enacted embargoes in 1941. Beginning with the surprise attacks on Pearl Harbor and the Philippines that destroyed the bulk of the Pacific Fleet and American strategic airpower in the Far East, respectively, the Japanese overwhelmed Allied combat power and seized territory in a perimeter that extended from Burma in southeast Asia through the Dutch East Indies and north into the small atolls of the central Pacific. The ill-prepared and outnumbered Allies had proven largely incapable of slowing the Japanese advance. The Japanese believed that the defensive perimeter constructed to protect its new supplies of raw materials could fend off Allied counterattacks and eventually force the U.S. to sue for peace.

To stem the Japanese advance and begin the process of fighting back, the U.S. rapidly established lines of communication to Australia. The goal was to turn the continent into an Allied bastion while sending carrier task forces on a series of raids onto Japanese possessions in the Central Pacific. These raids culminated with the Doolittle Raid in April, resulting in the first air attack on the Japanese homeland. While the raids inflicted only limited amounts of damage, they convinced the Japanese that they needed to extend their perimeter further to the east and south to isolate Australia.

The first Japanese attempt to extend their perimeter called for the seizure of Port Moresby on the south coast of New Guinea. This operation ended after American and Japanese carriers clashed at the Battle of the Coral Sea. The US lost the carrier Lexington while the carrier Yorktown suffered significant damage. The Japanese lost only the light carrier Shoho, but the carrier Shokaku suffered heavy damage in an air attack while her sister Zuikaku lost a significant portion of her air group. These losses forced the Japanese invasion fleet to withdraw, and, crucially, left the two Japanese carriers unable to participate in operations for the next three months. 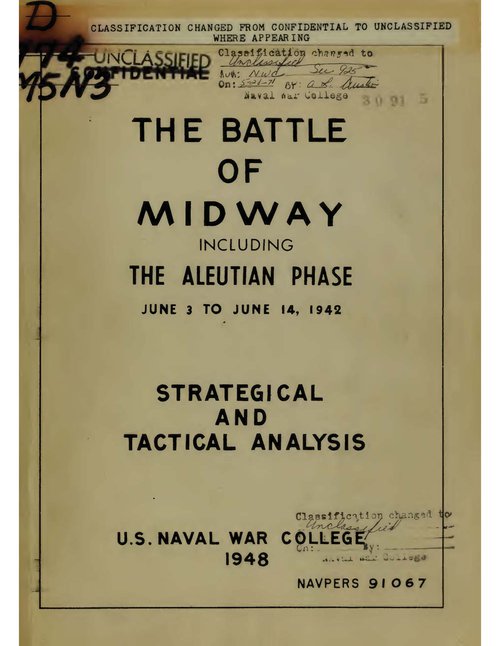 The Japanese planned to seize Fiji and New Caledonia to isolate Australia eventually, but first they set their sights on Midway and a concurrent operation to seize the western Aleutian Islands. To seize these dispersed targets, the Japanese dispatched a small fleet, including two light carriers, to the Aleutians, while they dispatched three separate fleets to seize the more important target at Midway. Although only a small atoll, Midway was close enough to Hawaii that the Japanese believed they could draw out the American fleet and defeat it in a decisive battle. The core of their fleet consisted of four carriers from their famed Kido Butai or “Mobile Force” that had struck Pearl Harbor, but also included an invasion force as well as a body of battleships trailing several hundred miles behind the carriers.

American codebreakers had successfully broken Japanese naval codes, although they could still read only portions of the message traffic they intercepted. Still, it was enough for Admiral Chester Nimitz, Commander in Chief of the Pacific Fleet, to dispatch his remaining carriers, Enterprise and Hornet, to Midway under the command of Rear Admiral Raymond Spruance to stop the Japanese. The damaged Yorktown arrived in Pearl Harbor on 27 May, and after receiving three days of frantic repairs, was also sent to Midway. Vice Admiral Frank “Jack” Fletcher aboard Yorktown commanded the combined fleet. The American carriers steamed to a point northeast of Midway and awaited the Japanese fleet.