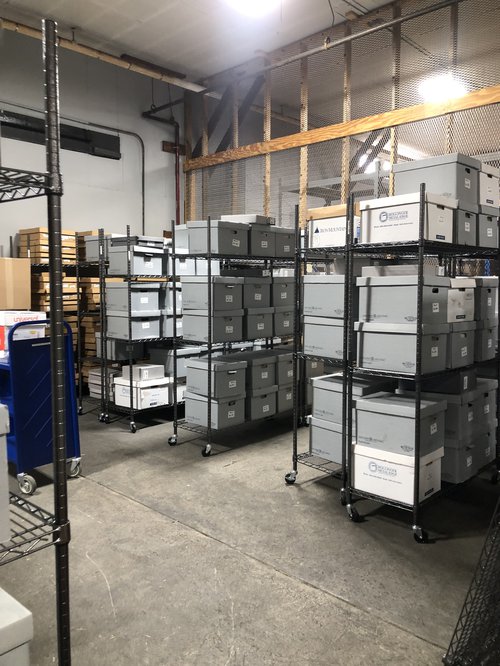 The Naval War College Archives, known as the Naval Historical Collection, has started to arrange the records of the Naval Torpedo Station (NTS) headquartered on Goat Island in Newport, Rhode Island. The records date from 1883 to approximately 1957, chronicling the administration and scientific studies of this early naval research facility. The records are vital to understanding the early history of the development and evolution of underwater ordnance and their place in naval warfare.

There is a lot to learn about these papers, as they have been in off-site storage since coming to NWC over 30 years ago. Having never been fully archivally processed, they have been near-impossible to access for research. The collection is also very large – over 500 linear feet, which is the equivalent of more than 500 banker boxes. The project is projected to take two archivists three years to complete. NHC hopes that by 2024, the collection will be fully accessible for research and study.

History of the records

Starting in 1947, the Torpedo Station sent records to the National Archives and Records Administration (NARA), as they are required to per federal record management guidelines. In December 1976, NARA requested that the Naval Underwater Systems Center (NUSC), the modern command for the now-defunct Torpedo Station, review the records because they believed that they were eligible for immediate disposal.

In 1977, the records were sent to NUSC for an in-depth review. If this hadn’t been done, NUSC undoubtedly would have lost its entire archive of evidentiary documentation. NUSC hired a firm to process the records, but their report concluded that they were ill-suited to the job and “the processing suffered because of their ignorance.” 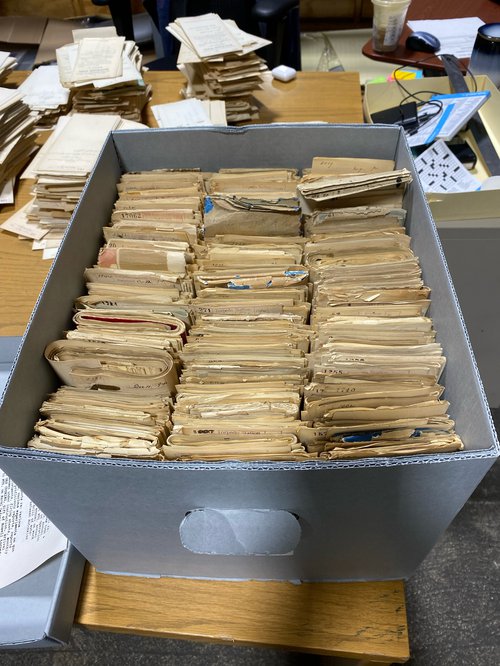 In February 1984, custody of the records was transferred from NUSC to the Naval Historical Collection (NHC) at the US Naval War College. But due to the NHC’s limited staff, the records were not inventoried and re-boxed until the summer of 1991. Two student aides were hired to prepare an inventory of the collection before the boxes went into off-site storage.

In 2018, the collection was returned to the College so that they could be more readily available to researchers, even though they were poorly inventoried. In addition, many documents were very fragile. Physical access by researchers was causing damage, and because of the unreliable inventory, researchers had to sift through multiple boxes of documents to uncover what they were looking for – a recipe for archival disaster.

In August 2021, NHC closed access to the collection as it began a large-scale processing project, performing conservation to stabilize the materials and arranging them chronologically to facilitate discovery. It will result in a professional finding aid for researcher use published on NHC’s collections website. Stay tuned!

What’s in the records 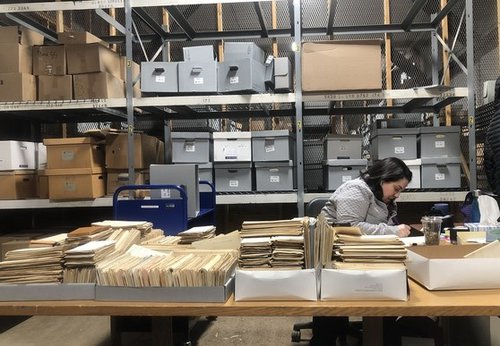 We aren’t sure! The full scope and content of these records is unknown as they have never been properly processed. So far, we’ve seen that the records consist largely of the files of the Naval Torpedo Station’s central record office, official central correspondence, including letters, memos, forms, reports, contracts and blueprints/plans, starting approximately 1883. Also included, are material stock cards likely from the Torpedo Station Shops, data books used for torpedo tests, blueprints of torpedo parts, photographs, ledger books containing lists of drawings. There also appears to be a gap in the records between 1925 and 1941.

Follow along with us as we work through the records and learn more about this singular historic collection. As we come across interesting finds, we’ll post them here.

If you have any questions regarding the special collections, please email us at nhc [at] usnwc.edu or visit our website. 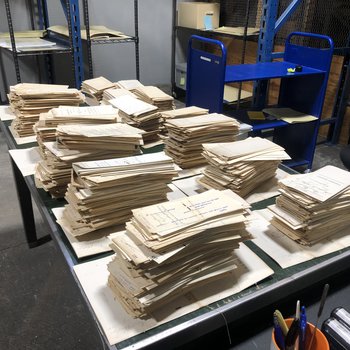 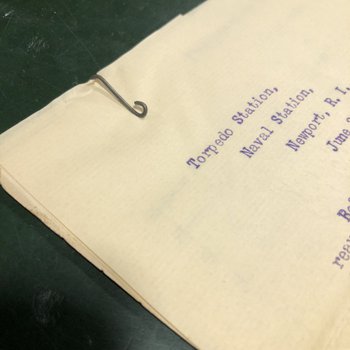 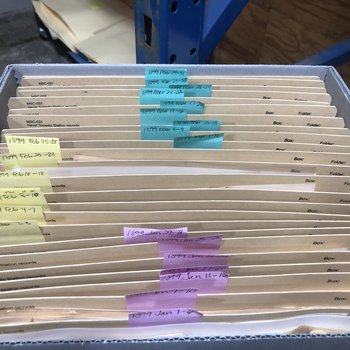 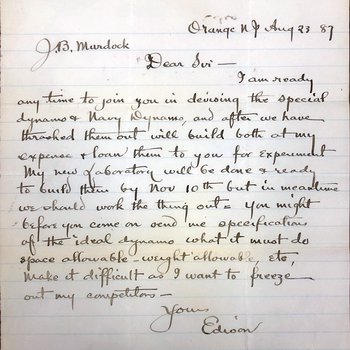 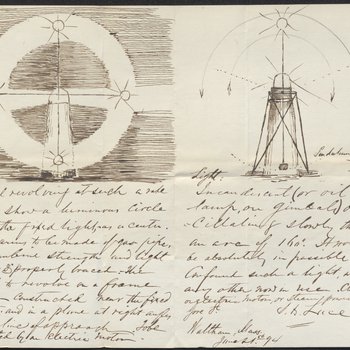 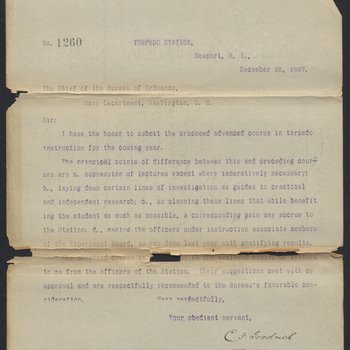 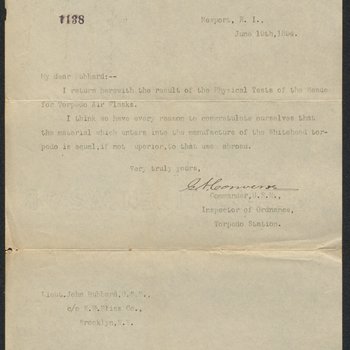 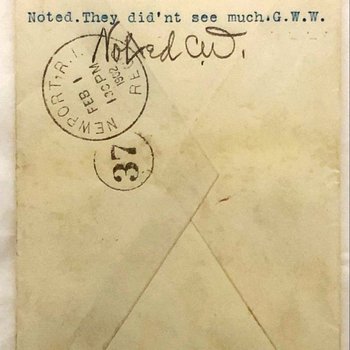 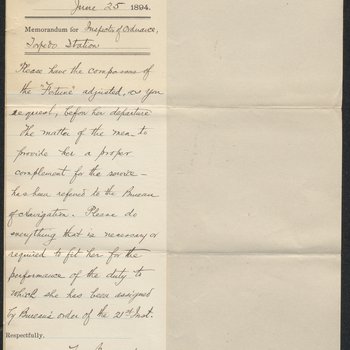 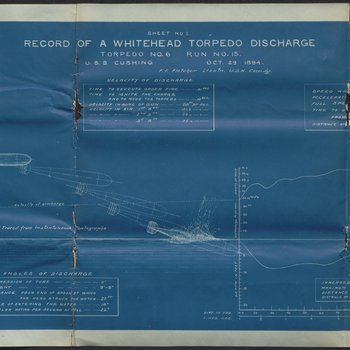 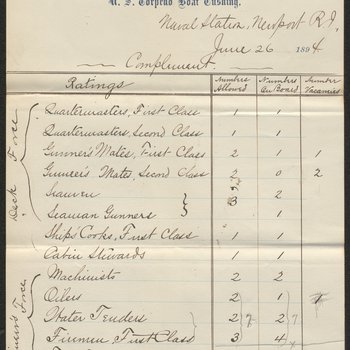 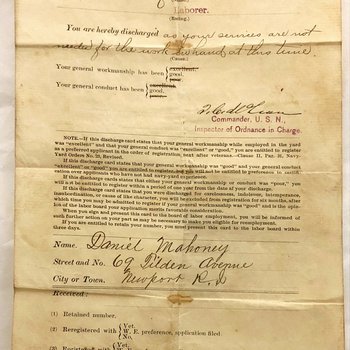